The body in Greek Christianity 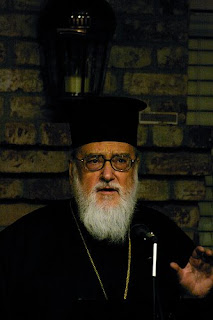 Kallistos Ware is a titular metropolitan bishop of the Greek Orthodox Ecumenical Patriarchate. I don't know what that means, but if your innuendo-dar is as sensitive as mine, you'll notice that that's a pleasingly appropriate title.

Ware takes a saying of John Climacus – that the body is 'my helper and my enemy' - as typical of an ambivalence towards the body in Greek Christianity. He suggests two reasons for this – one is the doctrine of the Fall which suggests that however good the body was to start with, it's now broken by sin and a cause of temptation. The other is a tension between the 'Hebraic-biblical' tradition which tends to see the human person very holistically, and the 'Hellenic-Platonist' tradition, which, while resisting full-on body/soul dualisms, tends to distinguish between body and soul in its discussions of human nature.

Ware also suggests that attitudes to the body were shaped by changes in society. Between 284 and 565 (I assume that's some significant historical period, though I couldn't tell you why), society became increasingly hierarchical and rigid, with social roles more clearly defined, and more hereditary serfdom meaning that peasants in the fields were pretty much stuck with the same bit of land as their fathers, and sons in the city had little choice but to take on the family business. He suggests that this increasing rigidity of society corresponds to increasing rigidity in terms of the rules by which the body and sexual behaviour were controlled. This might be partly to do with the influence of Christianity, but was a shift that begun before Christianity was really influential in the Roman Empire.

He outlines the views of various important Greek theologians. Origen thought that souls were created before bodies and were put in bodies as a punishment for earlier sin (let's talk more about Origen some time – he's bonkers), which didn't mean that bodies were bad, necessarily, but did mean that souls didn't need bodies and so the body wasn't seen as intrinsic to human nature. Clement of Alexandria, on the other hand, thinks we can only be saved through the body, and argues that the image of God in humankind is in the fact that by reproducing we get to take part in creation. He says that 'among those who are sanctified, even the seed is holy.' Athanasius, Gregory of Nyssa and Maximus the Confessor, though, think that we only get married and have sex because of the Fall, though Irenaeus and Augustine disagree – Irenaeus thinks that as they grew older, Adam and Eve would've got round to getting it on even without sin, but there just wasn't time between the old making-woman-out-of-a-rib lark and that bad thing they did with the apple (oo er).

So, a lot of ambivalent attitudes. Also, from the 3rd century the church started to reinstate Old Testament rules about women being unclean during their period, and it's still common practice in the Orthodox Church to ban women from communion while they're riding the crimson tide. There are also records of men being banned from communion if they had a wet dream the night before (Hi Tom, noticed you didn't go up for communion today, what gives? Well, er...) Also frowned upon is doing the nasty the night before communion, and while you could argue that this is about reverence for the mystery of sex, it contrasts interestingly with rabbinic traditions which see the Sabbath night as the most appropriate time for a bit of how's-your-father.

There's also a suspicion of bodies - especially women's - in the monastic tradition from the 4th century, but there's also a lot of reverence for the bodies of the sick and the poor. The ascetic tradition (that's the monks with the fasting, chastity, general self-discipline, and occasionally maggots) is often seen as being pretty negative about the body, and while there's definitely a bit of that, ascetic practice is perhaps better understood as a struggle to discipline the body so that it can be saved rather than because it's bad. Symeon, one of the Desert Fathers, once said, 'my hand is Christ, my foot is Christ, my penis is Christ.' So there.

There's also a long tradition of seeing the heart as the centre of the human person. Macarius uses the heart as a symbol for the whole person, and its seen as the place where the intellect is located and where grace enters us. Greek tradition often sees as the heart as the seat of thought, and tend to say that the true fullness of our hearts is hidden even from us. The prayer of the heart is, in the Byzantine tradition, prayer of the whole person, including the body and God's spirit praying within us, so to 'enter' or 'discover' the heart comes to represent the reintegration of our personhood in God.

Photo credit: treviño on Flickr
Posted by Marika at 14:53