Does theology make you happy?

A sociologist called Idler once (eventually) got round to proposing four ways in which religion might have an impact on people's well being: 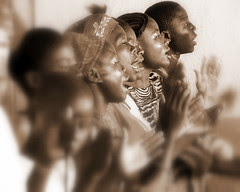 Apparently, a lot of research has been done into 1-3, but not so much into 4, so a guy called Marc A. Musick did some research into the effect of Christians' theodicy on their life satisfaction, published in the Journal of the Sociology of Religion as a paper called Theodicy and Life Satisfaction among Black and White Americans.

Theodicy is about answering the question, 'How can there be a good God when there is so much suffering in the world?' Musick wanted to find out the effect of different theological answers to this question on how satisfied people were with their lives. He did this by getting hold of information from a national social survey, and comparing people's answers to questions about their wellbeing to information about their denominational membership (different denominations tend to have different theologies about the problem of pain), ethnicity (more on that later), how often they went to church, and how much they saw the world in terms of good or evil.

Musick identified one key difference between different theodicies: whether they saw the world in as fundamentally good, or as fundamentally evil, life being seen in terms of a spiritual battle against evil forces. He came up with four hypotheses about the effects of these different sorts of theodicy:
So, he did his research, and all his hypotheses seemed to be supported by the evidence he found, but the strongest association he found was between service attendance and life satisfaction. Moral of the story: don't skip church, kids, it will make you sad. Overall, he found that religion seems to make people both happy and sad, satisfied and dissatisfied. This reminds me of something my dad once told me, church should 'comfort the disturbed and disturb the comfortable'. Which perhaps sort of answers an interesting question that this research raises for me: should theology make you happy?

Photo credit: Celestial Photography on Flickr.
Posted by Marika at 10:56

That was going to be my exact point - is one of the goals of religion/church about achieving happiness. I would hope not, as then it becomes an end in itself rather than a truth irrigardless of the individual

And yet at the same time, you'd hope that in Jesus people would find fullness of life, and would flourish. I think that church should be a place where we can form meaningful community, be loved, find support, encounter God, and be transformed into the people God made us to be, all of which would, you'd hope, make people generally happier. And yet you're right: it's not just about happiness; we live in a broken world and part of following Jesus is facing up to that and perhaps engaging with it in ways we might not otherwise. New Testament scholars talk about the kingdom of God as being 'now and not yet' - it's here, we experience it, and yet it isn't fully here and we wait in hope of its full arrival. I think that's what life is meant to be like right now: caught between the cross and the resurrection, experiencing something of both.

Good points. If the only reason we have religion is to make us happy, then as Paul says "we are to be pitied more than all men" (1 Cor 15:19). I guess what we really need is a good way to tell the difference between "happiness" and "fullness of life".

I am reading this while I'm supposed to be preparing my talk for church tonight. Anyway, as well as it being another great post, I noticed that you've missed a word (or more) out at the end of the haunted house sentence.

Oops, thanks Liz! All better now.

"Theodicies that place more emphasis on sin and evil are associated with less life satisfaction."

Funny, I was thinking about this as I sat in church on Sunday. Nothing wrong with admitting our frailties, but is there anything else we might do, say, when taking Communion? This Sunday I settled on saying silently, "I'm hungry", then accepting the sacraments as food.

Becoming myself involves a deeper kind of grumpiness (does the well of irritability have a smile at the bottom, or a rude gesture? I'm not there yet). Jesus is helping me to nurture that. It makes me happier to be miserable.