Manichaeism is a variant of Gnosticism, which is most often of interest to theology because Augustine, one of the most influential theologians of all time, spent several years as a follower of Manus, which means that those so inclined can have heated debates about whether his theology is Manichean or not. Good times.

Anyway, the Manichees basically believed in what is known as cosmic dualism: that is, they thought that the fundamental reality of life, the universe, and everything, was that two powers, good and evil, were locked in an epic battle with one other: like Luke vs Darth, Blur vs Oasis, Monsters vs Aliens, except it goes on forever. It's the meeting of the immoveable object and the 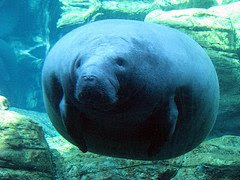 irresistable force (maybe they should just get married), but one of them is nasty and the other nice.

The Manichees thought that the material world was a creation of Evil, but that at some point in this eternal punch up, Evil/Dark had damaged Good/Light so that there were tiny fragments of the divine scattered throughout the material world, and could be found in greater concentration in certain animals and plants. Humans were made up of souls (good) and bodies (bad), and could be saved by identifying themselves with their souls and rejecting their bodies. They could also eat lots of melons and cucumbers which has particularly high concentrations of divine sparks and hence considered the Manichaean superfoods. They were also supposed to abstain from sex, although, as Augustine found out, they weren't always so hot on this one.

Photo credit: Scott Kinmartin on Flickr. That's what a Manichee Manatee looks like. Ah, crap, mixed them up again.
Posted by Marika at 16:01

I like this easy to understnd style of writing and humour. Excellent.
Lots I didn't know there - thanks

Nash, "especially if he has income and she is pattable."

Ogden Nash is funny. I confuse his name with that of the flute playing wild rocker from the 70's for some odd reason.