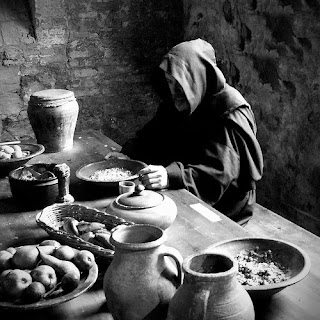 Once, when Brother Juniper was staying in a friary, all the friars had to go out at once, leaving Brother Juniper on his own, perhaps unwisely. They asked him if he could do some cooking and have their tea ready for them when they got back (again, at this point you may want to question their judgement). Brother Juniper was only too happy to help out. But as he was getting ready to cook, he thought to himself 'Well, it's just silly for someone to always have to be cooking instead of praying. I know what I'll do, I'll cook two weeks' worth of food all in one go, and then we can all pray all the time instead of faffing about in the kitchen.'

So off Brother Juniper went to town, to fetch enormous cooking pots and oodles of food: meat, birds, eggs, herbs, and no end of firewood. He lit the fire and then tipped all the food into the cooking pots: the birds with their feathers on and the eggs in their shells, in it all went. When the friars came back, one, who had been worried about what Brother Juniper might get up to, went into the kitchen to have a look-see. He found Brother Juniper skipping happily around the kitchen, busily cooking. Excited, he told the friars that they could expect a feast. They thought he was joking.

When the dinner bell rang, the monks sat themselves at the table, and Brother Juniper came in, beaming, and proudly announced that they needn't worry about cooking for a whole two weeks as he'd cooked so much food. And he served up his cordon bleu cuisine. "There is no hog in the whole of Rome hungry enough to eat thereof", says The Little Flowers of St Francis. But Brother Juniper smacked his lips and tucked in, explaining to the monks just how nourishing the food was.

But the warden, angry about all the wasted food, gave Brother Juniper a thorough ticking off, at which Juniper fell on his knees, beating his breast and confessing that he was a terrible sinner for having wasted God's good gifts. He went off, weeping, and no one saw him for the rest of the day.

The warden sighed, and said 'Brothers, if only someone would waste this much food every day out of such simplicity and charity. How much we would learn.' But I'm not sure he meant it.

Photo credit: publicenergy on Flickr.
Posted by Marika at 19:51