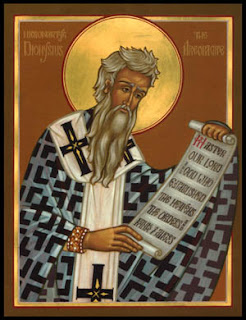 Pseudo-Dionysius/Dionysios/Denys the Areopagite, or, as we shall call him, plain Dionysius (I was once rebuked by a supervisor for referring to him as 'Pseudo-Dionysius': 'Poor chap'), is little known outside certain academic circles (most theology post-grads I have met respond to his name with a baffled “Who?”), but nonetheless very influential. He’s called ‘Pseudo’ Dionysius because, although he was a 6th century Syrian theologian he writes as though he is the Dionysius who was converted by Paul’s sermon about the unknown God at the Areopagus in Athens. Because of the original Dionysius' relationship to Paul, the pseudo Dionysius' work was seen as a notch down from the authority of the Bible for many centuries. He is one of the three thinkers most-quoted by Aquinas (the others being Augustine and Aristotle, if I remember correctly), and is the most influential figure on the Western tradition of mystical theology. But in the 19th century people started to suspect him of not being quite as old as he claims, and lost interest for a while, until in the 20th century people started to get interested in apophatic theology and to write books about Dionysius and his relevance to modern theology.

People disagree about whether his pseudonym was just a naughty attempt to seem more important than Dionysius actually was, perhaps to settle doctrinal disputes, or whether it wasn’t really ever meant to be a big deception. People who think we shouldn’t be too cross with Dionysius for pretending to be someone he wasn’t often argue that his chosen name is meant to communicate something about what he was trying to do. In Paul’s account, Dionysius was a Greek, in Athens as Paul preached the gospel to the Greeks, and certainly the heart of Dionysius' theology seems to be an attempt to reconcile Christianity with Greek philosophy, especially Neoplatonism. Again, people disagree on whether this was a good thing: was Dionysius a brilliant thinker, engaging with the best philosophy of his day to make the gospel relevant, or was he a sell-out, compromising the core truths of Christianity for the sake of seeming more relevant to the educated people of his day?

The works we have by Dionysius are The Celestial Hierarchy, The Ecclesiastical Hierarchy, The Divine Names, The Mystical Theology, and ten Letters. In The Celestial Hierarchy, Dionysius identifies nine ranks of angels and describes them. In The Ecclesiastical Hierarchy, Dionysius describes three ranks of lay Christians, three ranks of church leadership, and three crucial Christian rites which he describes in some detail (apparently baptism in the 6th century Syrian church involved getting completely naked before being dunked in water and covered in oil). The Divine Names is all about, er, names for God, and The Mystical Theology is all about the ways in which all of those names are completely inadequate for describing God. There are also a couple of books - The Symbolic Theology and The Theological Reflections which we don't have but Dionysius claims to have written. No one's quite sure whether they exist but got lost or were never real in the first place.

Dionysius is interesting, fun, blessedly brief, and is also the only theologian I've read so far who argues that God is drunk. For that reason alone, he's well worth attention.

Everything changed for me after I read The Divine Names and Mystical Theology. PD is one of my favorite theologians. I really wish he were given more credit sometimes.

"Perhaps the problem of what to do with the matter of belief in Beckett is a localised version of the problem, if that is what it is precisely, of the return or refusal to be evaporated, of religion in the heart of the most radical and sceptical forms of philosophical thought... [several studies cited]... Not for many a long year, one may surmise, has the name of Pseudo-Dionysius the Areopagite been on the lips of so many." from Steven Connor, 'Beckett's Low Church'.

Maybe he'll be making more of a comeback. Marika, article may be of interest to you: some gestures to Zizek + a concern with f***ure.